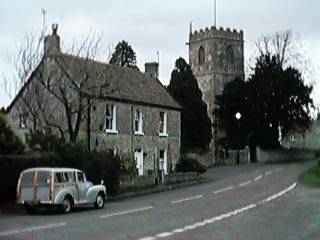 Pictures and information about Doynton bells may be found on this page.

Doynton has no ringers and the bells are un-ringable due to the five tightening
the wooden frame on to the front four. The front four went well when last rung
in 1999.

Below is correspondence about Doynton bells over the years, select from the
drop down box below.
We have had made a number of overtures to the vicars of Doynton
over the years, mainly when we have been ringing for Evensong at Dyrham without
much success about the bells.
We found a report produced by Ken Weekes(deceased) in 1988 which I have now appended to the correspondence list! (09-07-2014)
I wrote to the Rev'd Tim Bell in June 2014, letter can be selected and had a reply from Mrs Marsh now Church Warden,  as you can see she/they are not really interested in what happens to the bells!
Update 2019.
I am probably late with this update, but at last it there is good news at Doynton.
Mrs Marsh the unringable Church Warden  retired and we now have a ringable Churchwarden, to such an extent
that a new floor has been put in above the toilet, the bells have been rung by a band including local
members although they were not good enough to say they were involved.
On enquiring about providing a local band to ring for church services the offer was currently turned down until the PCC have seen the proposals from a local bell hanger Mathew Higby.
Watch this space.
One concern is the access to the new floor which I am led to believe is a ladder straight up the wall!