The Rural Branch Millennium year Striking competition took place at Frampton Cotterell on June 10th. This year we had seven teams from seven separate towers enter, plus a scratch team from six of the towers. The draw took place at 17.00 which had to be slightly rigged as one team had members who had to leave early and one team which could not arrive until late and then  some members had to leave immediately afterwards, but Martin the Ringing Master managed this well without any major problems.The ringing commenced at about 17.15 and whilst the first team were ringing the rest of the assembled ringers availed them selves of the excellent tea which was being looked after by a group of willing helpers.  The proceeds of which were to be donated to Iron Acton bell and tower restoration fund.
Below are a few pictures taken on the day. 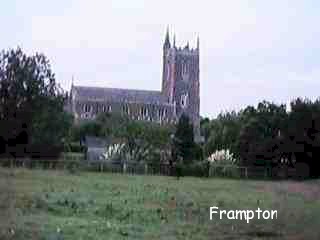 Bert Ferris the Tower Captain of the winning team 'Westerleigh' receives the 'Rural Branch Trophy' from Elizabeth Byrne  the wife of our other Judge Frank Byrne. Westerleigh will now represent the branch in the Croome trophy at Treddington in September.
One interesting fact, Brian Angell who made the trophy in about 1968 was in the winning team and he says it is the first time he has ever been involved in winning the trophy.
Thanks to all the teams who entered and all the people who brought along the cakes and sandwiches for  the excellent tea that was provided for us all.